He has taught the Energy Arts System since 2000 and became a Senior Instructor in 2018. His certifications include:

He teaches regular workshops in York and in Fife and provides seminars for private and public sector organisations in Scotland.

On leaving school Jackie served an apprenticeship as a panel beater and spray painter. 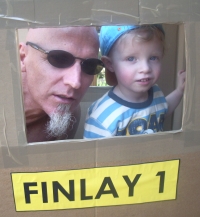 After completing his apprenticeship he spent over ten years travelling the world and working in various occupations from teaching English and building bomb shelters to landscape gardening. He was an enthusiastic cyclist throughout and in 1988 he cycled from New York to Seattle then through Central America and on to South America arriving finally at Rio de Janeiro. Exhausted from his journey he stopped off at a local hostelry and bumped into his favourite band Jethro Tull and this resulted in an extended career in the music business working with various artists including the likes of Van Morrison, Bill Wyman, Ritchie Blackmore, the Waterboys and Steeleye Span. In 1993 whilst still touring, he swapped the bike for tai chi and apart from still working as Tour Manager for Steeleye Span he has in the main left the road behind for endeavours focussed on his son, health and longevity.

“Jackie is an exceptional teacher. His guidance is clear and easy to remember, and combined with a nice sense of humour. His attitude is positive and encouraging and I particularly like the way that he remembers what it is like to be a beginner, despite having practised and perfected his art for many years. The system of Qi Gong he teaches is unusual for its clarity and detail, and understanding of body mechanics – thanks for saving my knees joints!”

Richard Blackwell, Principal of the Northern College of Acupuncture, York.

“I’ve found Jackie to be an excellent teacher. He has a lot of patience and the ability to explain the moves in a clear and simple manner. Jackie’s classes are a joy to attend because of his infectious enthusiasm for Tai Chi.”